Announcement: Women’s Chief Coach BROOKES|Rowing is delighted to announce that Hugo Gulliver has been appointed the position of Women’s Chief Coach. Hugo is coming from University of London Boat Club, where he has been instrumental in the recent rise in performances that have culminated this summer in winning three Henley Women’s Regatta events including: Open Pairs, Open Fours and Academic Eights and at Henley Royal Regatta winning the Prince Albert Challenge Cup.Over the last six years, Hugo has helped drive UL’s return to being a dominant force in university rowing throughout the country. In 2018, British Rowing appointed him Lead Coach for the World University Championships in Shanghai; where Gulliver

Brookes qualified 95 athletes in the regatta across 17 crews with a total of 37 Henley Medals. A historic week came to a close on finals day, with Brookes having won the Grand Challenge Cup in the mornings session for the first time in its clubs history as a single named entry, beating a Brookes old boys crew – Taurus BC -after no other Club or Nation decided to enter.  It was more of a processional race but respect was shown to all on the finish line for the time and dedication all had played in helping to get the club to this point in history.  In the Ladies Challenge Plate, Brookes gained their fourth 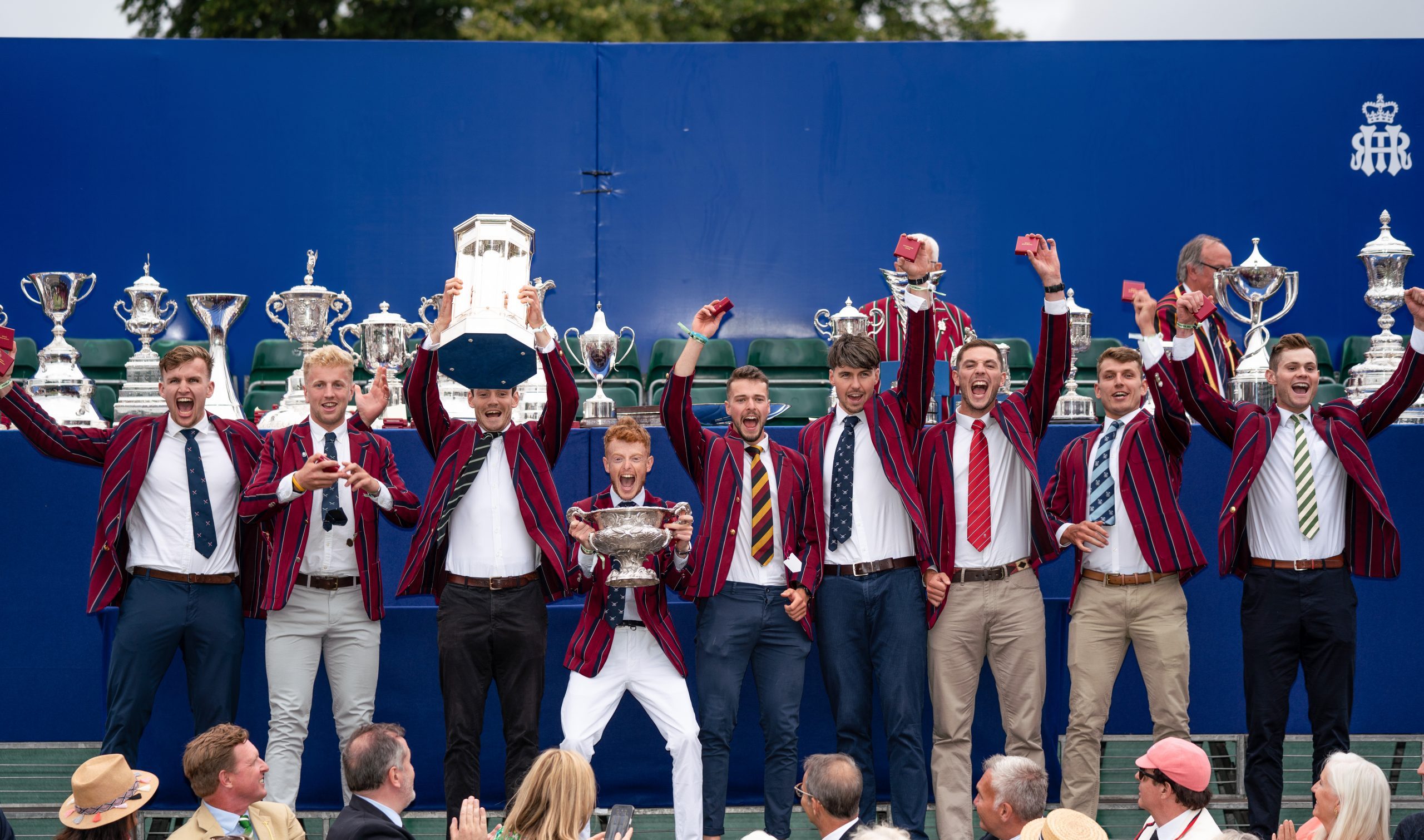 Five Brookes Athletes medal at U23 World Championships In another exciting weekend of racing, five Brookes athletes represented Great Britain in the U23 World Championships held in Racice, Czech Republic. After an exciting build up to finals day held this Sunday, our Brookes athletes looked to be in contention for fighting with the worlds best U23 crews for medals. After a strong performance in the Heats, the Women’s Four progressed straight to the A-Final. Daisy Bellamy and Lettie Cabot, made up half the quartet and after success at the World Cup III and the Final Open Trial earlier in the season, they were looking to make a fast start in 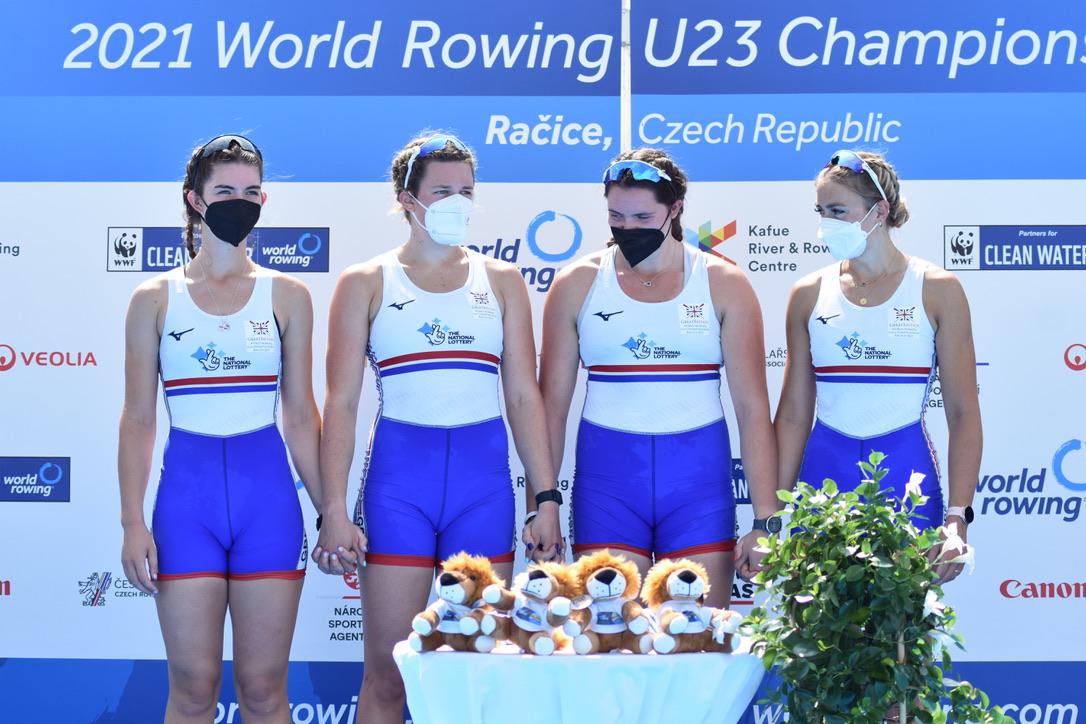 Oxford Brookes Women claim the top prize in the Open Championship Eights at Henley Women’s Regatta. After a powerful display in time trial and semi-final, the Oxford Brookes Women’s Championship VIII lined up against a talented Tideway Scullers Crew. In challenging conditions, on what was the original finals day for the Henley Royal Regatta, the Brookes crew made a flying start and continued to build their lead throughout the race to take a memorable victory. There were six returners from the previous weekends’ success at the BUCs Regatta in the crew. Autumn Mantell and Sophia Heath have had individual previous success in the event, however, it was the first victory 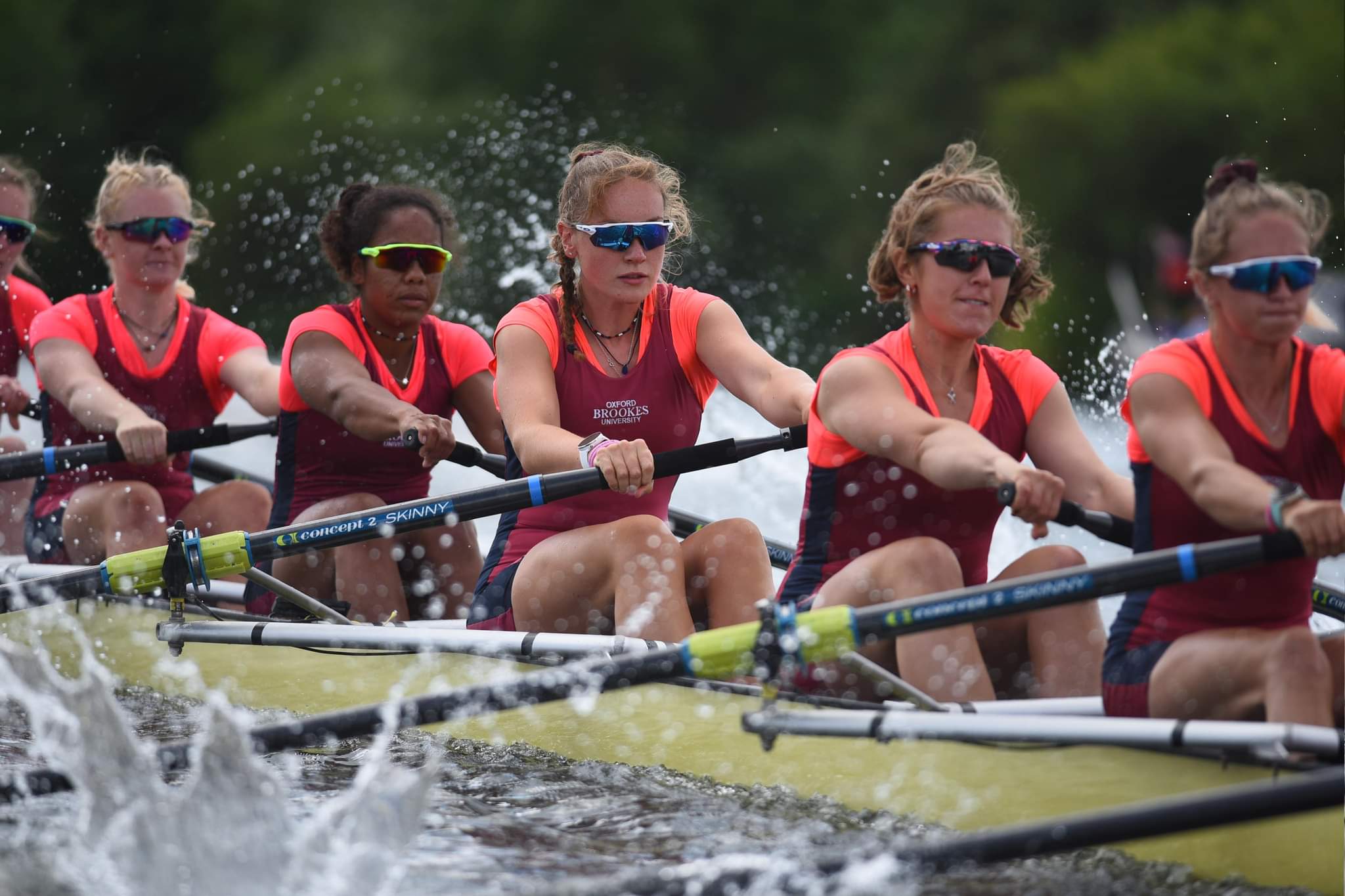 The Women’s squad claimed their first victory in Championship VIIIs for five years and the men’s squad were unbeaten and claimed BUCs Records across the sweep events in Nottingham this weekend. On Day 1, the women raced in smaller boats. In dreary conditions, the Women claimed the Championship Coxless 4- Gold after a dramatic row-through in the closing stages of the race for the top spot with the crew from UL. After trailing much of the course, the crew of Harriet Ferguson, Taylor Caudle, Isy Hawes and Beth Dutton remained composed to take the lead in the last metres of the race. The Women’s Intermediate 4+ claimed a very respectable 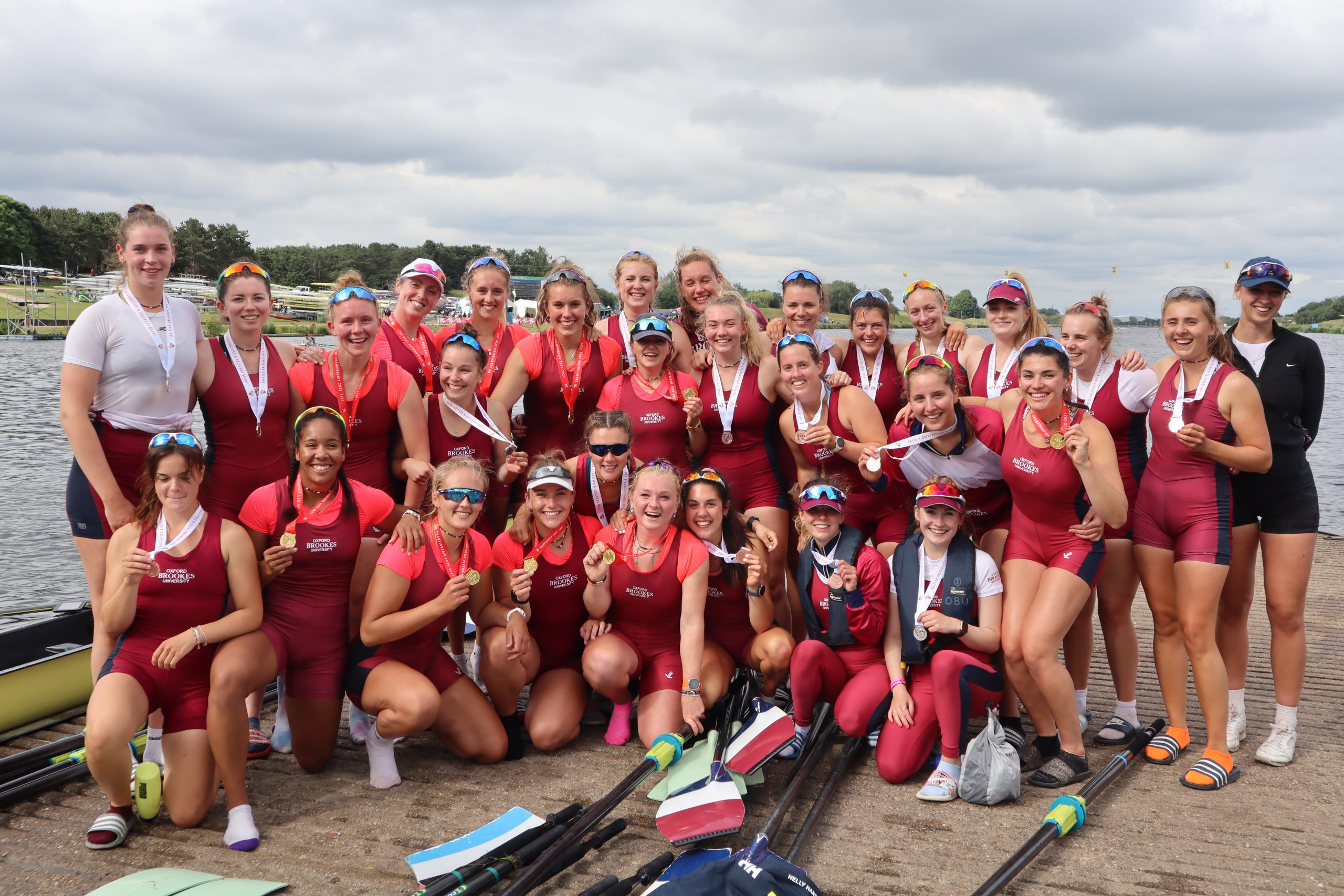 The Brookes Men’s squad, bolstered by the return of several of our Olympic Pathway athletes from the World Cup III were in racing action this Saturday at Eton Dorney Lake, for the Marlow International Regatta. Sadly, the Brookes team were four athletes short of a full complement as they are currently away training as a part of potential U23 projects. Oxford Brookes University had five Eights entered between the Championship and Tier 2 events in the early morning session. Several athletes doubled up in Coxless and Coxed Four’s throughout the rest of the day. Racing was competitive and many lessons were learnt by athletes and crews throughout the team in

BROOKES|Rowing put on a display not only on the International stage this weekend but also in the largest domestic race since the COVID-19 pandemic paused events and competition back in 2020. After 461 days since their last race in an VIII, Brookes fielded a strong contingent of athletes at The Metropolitan Regatta on the Dorney Lake Olympic course for a busy two days of racing. On Saturday, the Brookes Women dominated the Time Trial to qualify two VIIIs in the A Final. With an incredible standard of racing by all, less than a second separated half of the field during the Championship W8+ final. After a strong 3rd500m, the Brookes 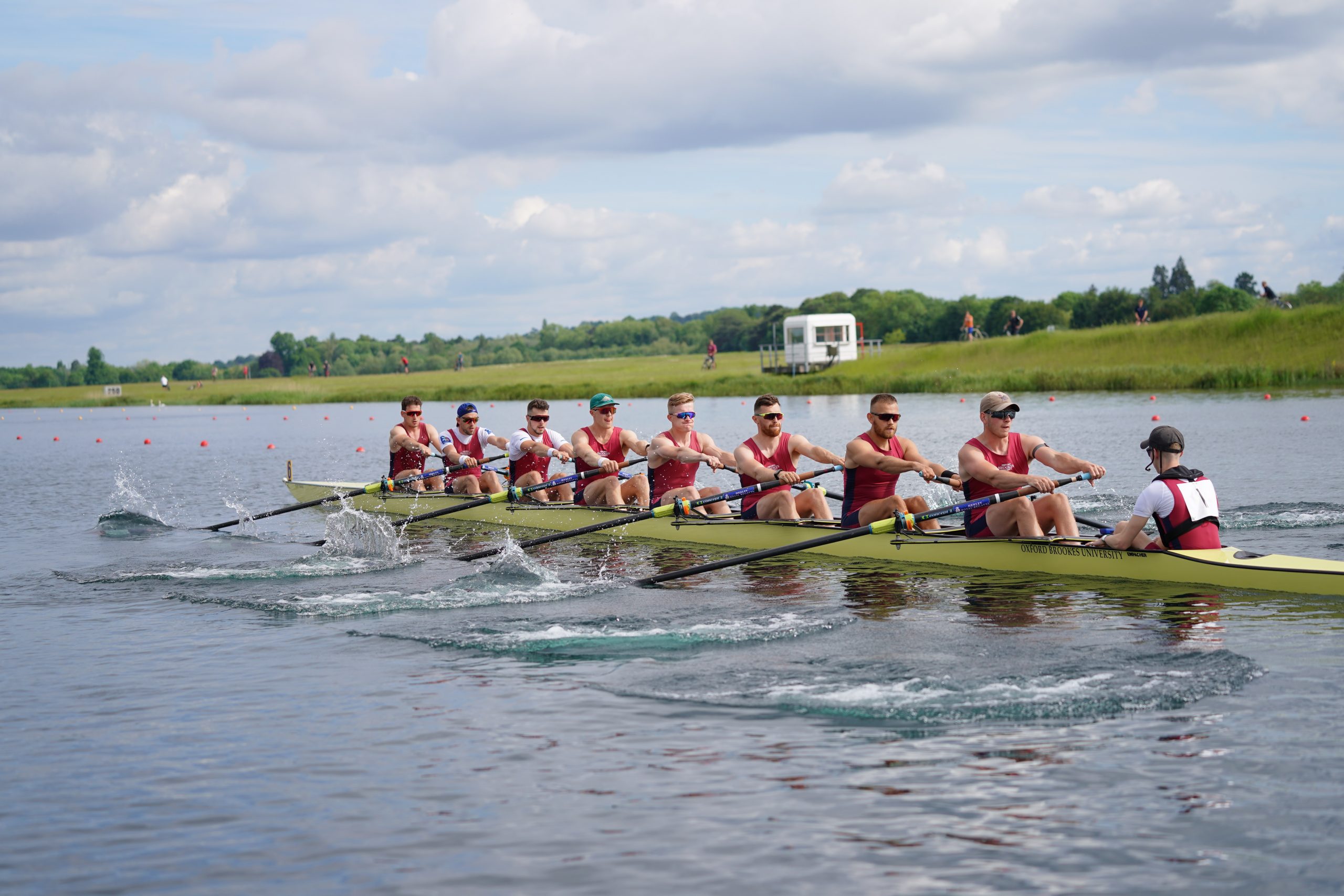 The performances this weekend at World Cup III in Sabaudia, Italy was a true testament to the strength, depth and development of the group of athletes who are a part of the Olympic Pathway Program (OPP) at BROOKES|Rowing. For all involved it was their first Senior International competition and several prospective Olympic Crews were to attend the Regatta. Men’s Coxless Four – GBR 1Sam NunnSam BannisterMatt AldridgeDavid Ambler Men’s Coxless Four – GBR 2Lenny JenkinsMatt RoweDavid Bewicke-CopleyFreddy Davidson Harry Brightmore – Coach Women’s Coxless Four – GBREsme BoothDaisy Bellamy Lauren Irwin (Leander)Hope Cessford (Leander) After being granted Elite Athlete Exemption earlier in the year, a group of 15 athletes from both

Sophia Heath and Lettie Cabot were the top performers in the W2- at the Open Trials at Caversham yesterday afternoon. Racing was moved due to an unpredictable forecast to the Saturday after being initially scheduled for both days over the weekend. After setting the pace in the time trial earlier in the day, Heath and Cabot were in contention with the rest of the field until halfway, but eventually went on to win the trial with a dominant display. The Men’s squad had several positive results from members of both the Olympic Pathway and Student Programmes. Henry Blois-Brooke and Quentin Antognelli claimed 2ndposition with Michael Glover and Oscar Lindsay in 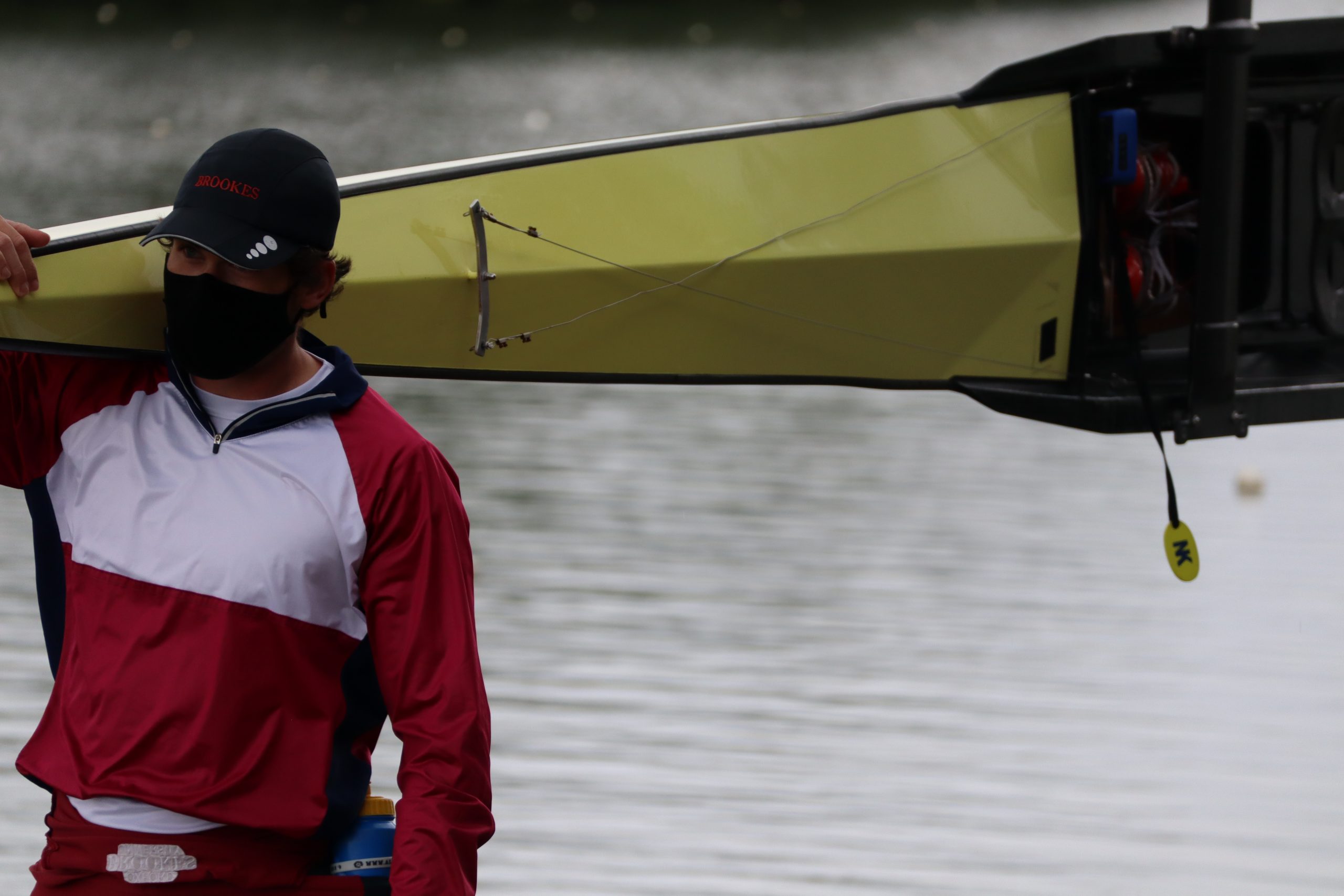 One of the most staggering improvements since the boat club’s foundations are the results that have been witnessed at the Head of the River race. BROOKES|Rowing have now held the Headship since 2016 and in the last two races have placed three crews inside the Top 10. What is clear, is the spirit of the club remains the same from top to bottom. Everyone gives their best and it shows with the 4-6th eights inside the Top 20 and with the 7th eight coming a respectable 53rd in 2019. What is equally exciting for the future of Oxford Brookes University Boat Club is the development of the women’s squad and 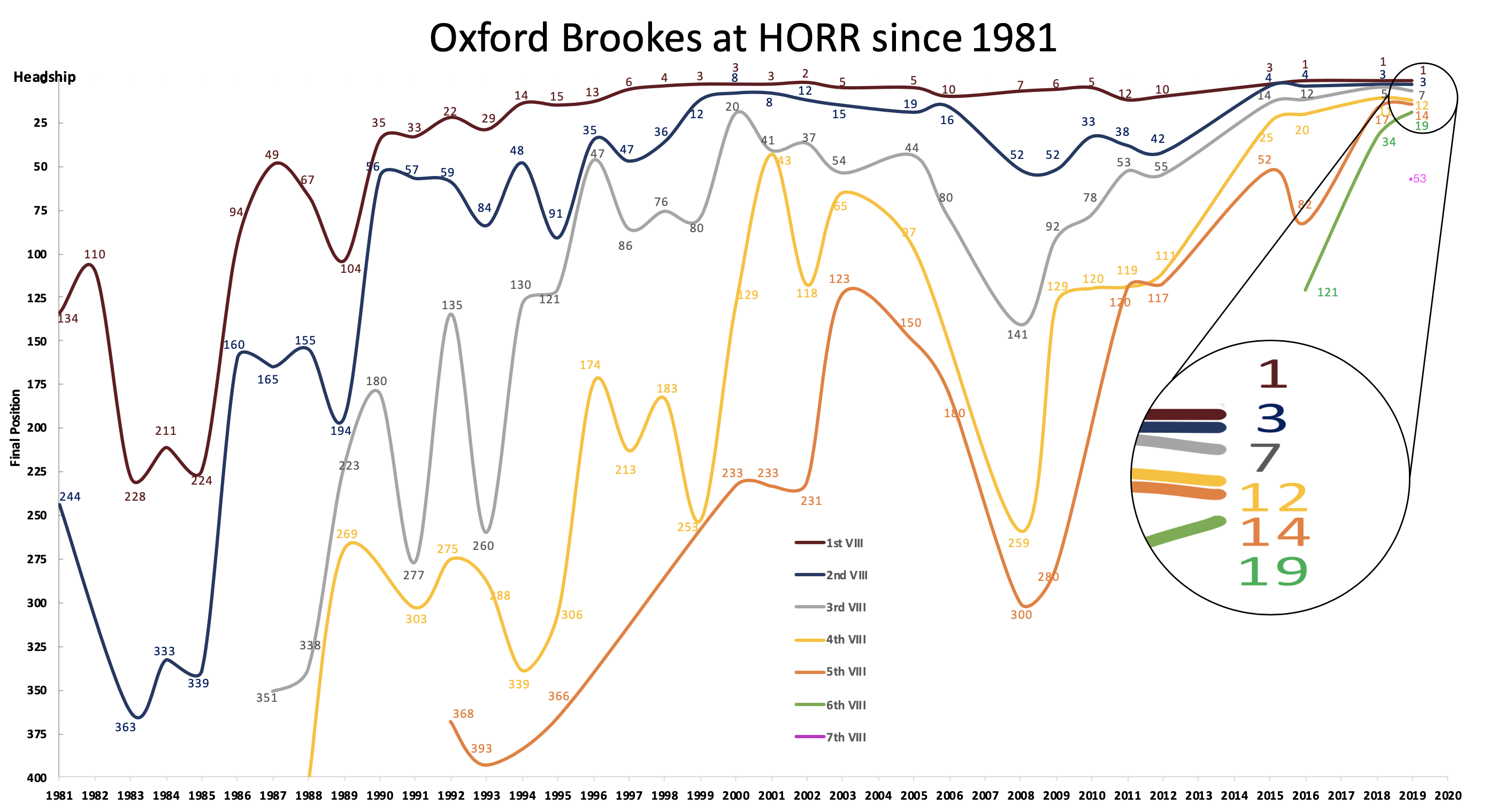